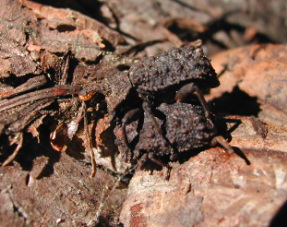 Mating Forked Fungus Beetles
I am interested in population ecology and a broad array of conservation issues from the biology of rare and endangered species to the impact of forestry practices on populations, communities and ecosystems.

My research interests include reproduction, social organization and movement, especially dispersal.  These topics, within a habitat mosaic at the level of the landscape are central to understanding population structure.  Dispersal is of special concern as it affects both the dynamics of population density as well as population genetics.

In the recent past I used microtine rodents as model systems; however, I developed increasingly severe allergies to rodents and this forced me to find an alternate system for investigation.  I now use the forked fungus beetle, Bolitotherus cornutusFomes fomentarius, Ganoderma applanatum, and Ganoderma tsugae.  The beetle lives up to 4 years and has low fecundity.  During the summer breeding season (June to August) a female lays approximately 20 eggs on the surface of a sporocarp.  The larvae tunnel through the sporocarp to feed, while the adults feed on the underside.  Both adults and young survive the winter within the sporocarps.  Males have pronotal horns, making it easy to sex individuals in the field.  Individuals measure about 10 mm in length, and are harmlessly and permanently marked with enamel paint.  Sporocarps last for up to 10 years, and are thus a potential resource for several generations of beetles.

Beetle habitat patches can be discretely defined at several spatial scales.  A sporocarp can be considered the grain size for the beetle and is the smallest unit of habitat.  A bole of dead wood supporting several sporocarps I define as the patch.  The beetles easily and frequently move among the sporocarps within a patch.  Patches may be more or less isolated.  Although not necessarily discrete, larger scales can be defined based on boles of dead wood supporting sporocarps separated by increasing distances, e.g. patches within a forest stand or within a forest fragment.

In the past the population of forked fungus beetles was defined as the individuals occupying the patch.  This restricted definition of a population led to conclude that the forked fungus beetle had a non-equilibrium population genetic structure.  One of the exciting findings from my research has been the understanding of what constitutes a population and the consequences of landscape structure on the population. Panzer (Coleoptera: Tenebrionidae).  This beetle is an ideal model species.  Its habitat consists solely of the sporocarps of the bracket fungus.